American artist and printmaker closely associated with pop art in the early 1960s, who was made an honorary Royal Academician in 2015. Born in Ohio where he studied in Cincinnati, he moved to New York in 1959.  He has had a number of major retrospectives including at the Museum of Modern Art, and the Whitney Museum of American Art and the Guggenheim Museum. 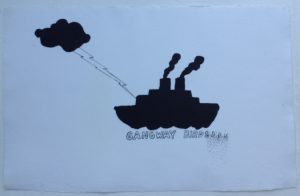 We can let you know when more work by Jim Dine comes available.